explore the many collections in the area 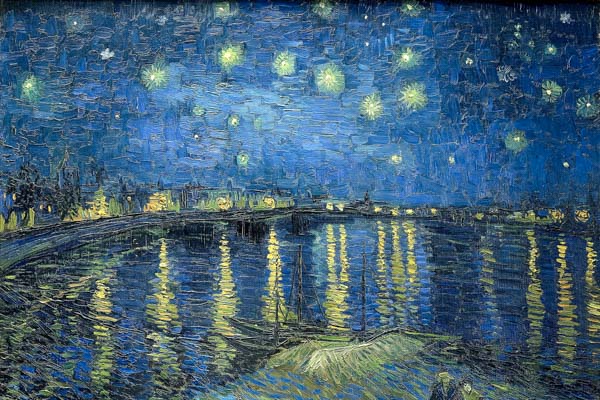 The time that van Gogh spent in Arles and St-Remy was the most productive of his life. Many of his best-known works, including Starry Night, Cafe Terrace at Night, Bedroom in Arles, Sunflowers, were painted here, and while you cannot normally see a van Gogh in Arles, you can follow in his footsteps and follow the markers showing where he planted his easel to paint some of his most famous scenes. You can download the tourist office’s leaflet, Following Vincent’s Footsteps.

Arles also has the Fondation van Gogh museum, although this does not own any of his paintings, and is designed as a place to show art inspired by him. That said, it does have interesting shows. Sadly there is only one van Gogh painting on permanent show in Provence, and that is in the Angladon Museum in Avignon. All the rest are in the great museums of the world or in private hands.

In 1889 van Gogh checked himself into the Saint-Paul-de-Mausole asylum in St-Remy-de-Provence to treat his mental problems. Here too he was prolific and produced more extraordinary paintings, starting in the asylum grounds, a former monastery, and then beyond in the hills and olive groves of the Alpilles. There is a half-mile walk from the centre of St-Remy with explanatory panels at the places he painted, and ending at his room in the St-Paul-de-Maussole monastery. You can get a map for this walk from the tourist office in St Remy. 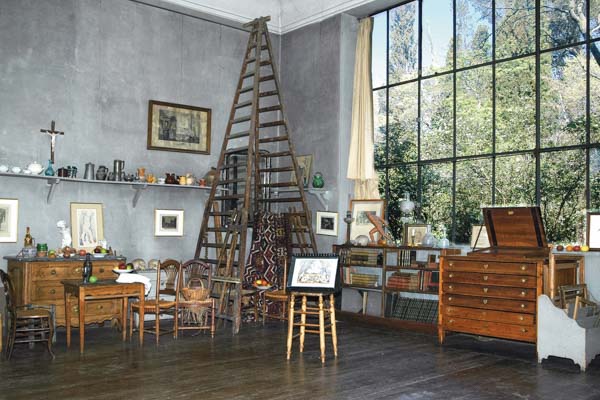 No artist is so associated with one place as the post-impressionist Paul Cezanne with Aix-en-Provence. This is where he was born and died, and spent most of his time in between painting, and cementing his reputation as ‘The Father of Modern Art’.

There are some Cezannes to see in the Granet Museum in Aix, unfortunately not the mass of paintings he tried to give them, only to be rejected by the curator at the time. But there are other Cezanne points of interest in Aix.

At Les Lauves, 20 minutes’ walk up the hill from the centre, you can see Cezanne’s painting studio more or less as he left it, with an extraordinary level of personal items and materials, even his actual coat and umbrella hang at the ready. It looks like he has just popped out for some air in the garden.

Another atmospheric place to visit on the Cezanne trail is the family home called Jas de Bouffan, just on the outskirts of Aix. Currently closed for massive renovation, Jas de Bouffan is due to re-open in 2023.

The third Cezanne stop-off is the Bibemus quarry to the east of town. This is a landscape of sandstone and ochre shapes jutting out of the earth amid pine woods, and was where Cezanne entered his more cubist phase (some say where he invented cubism). You can relive the setting of some of his paintings, including the view to the Sainte-Victoire mountain. Bibemus quarry can only be visited on a guided tour, booked in advance at the tourism office in town.

But you can also get drawn into the world of Paul Cezanne without leaving the city centre. There is a Cezanne walk marked by ‘C’ studs in the sidewalks, which takes you past his old haunts from birthplace to grave, including homes, schools, the bars he frequented, all within the centre of Aix. It’s also a nice way to take in Aix-en-Provence. The route is called In The Steps of Cezanne and you can pick up a map at the tourism office, which is where the walk starts, or download it here. 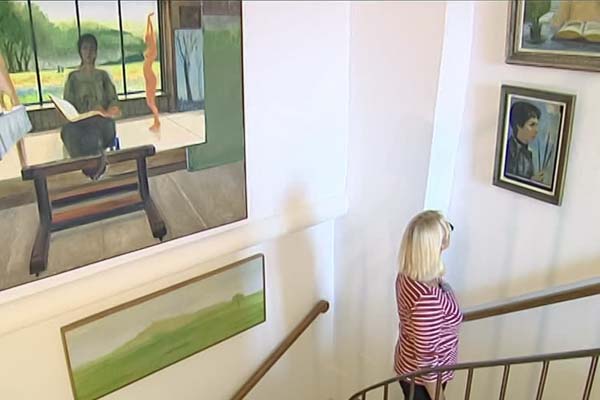 THE ARTISTS OF MENERBES

The beautiful Luberon village of Menerbes has attracted more than its fair share of artists in the 20th century, all the way up to Picasso, and is still home to many artists today. The Pascal Laine gallery in the centre of the village sells the work of local artists.

Jane Eakin’s friend Joe Downing was also an American painter living in Menerbes for many decades until his death in 2007. His work hangs in places like the Smithsonian and MOMA rather than in Menerbes, but there is a very nice little memorial garden to Joe Downing, near the top of the village, opposite the Dora Maar house.

Dora Maar was Picasso’s mistress, and he installed her at the end of their affair in a large Menerbes house in 1944. She lived there alone until her death in 1997. She had been known primarily as a photographer before the war, and Picasso pushed her into painting. At a retrospective exhibition at the Tate Gallery in London in 2019, it became clear that she was a very consequential artist, both as painter and photographer. The Dora Maar house is now used for artists’ residencies, and is occasionally open to visit.

Nicolas de Stael, a well-known abstract artist, is also associated with Menerbes, he bought the little chateau called Le Castellet at the western end of the village in 1953 and it is still in private family hands so cannot be visited.

Where to see art in and near the Luberon 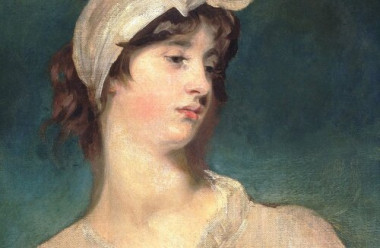 A private collection shown in what was once the Doucet family home. Downstairs are works by Picasso, Van Gogh, Cezanne, Degas, Manet, Sisley and Modigliani. Upstairs you can discover how this wealthy family lived in the 18th century.

Avignon’s fine arts museum has a large collection in a beautiful mansion, with paintings and sculptures from the 15th to 20th centuries, including Bonnard, Manet, Sisley, Vuillard, and the Avignon school (Joseph Vernet, Simon de Chelons). 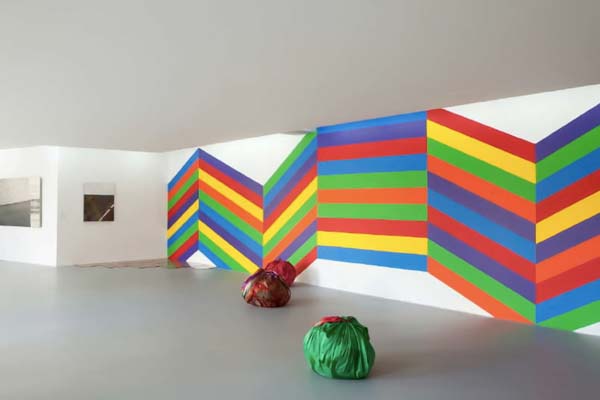 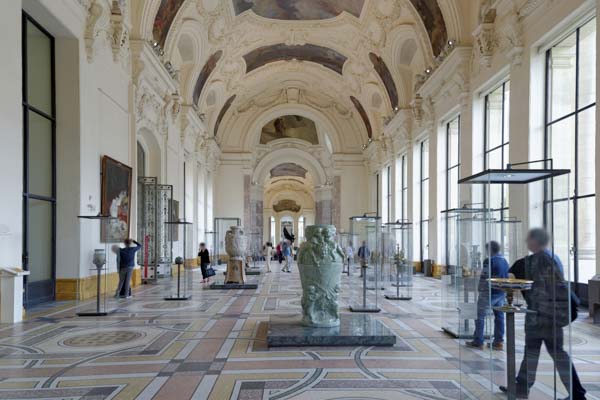 Paintings from the Middle Ages and Renaissance, including Botticelli and Carpaccio. 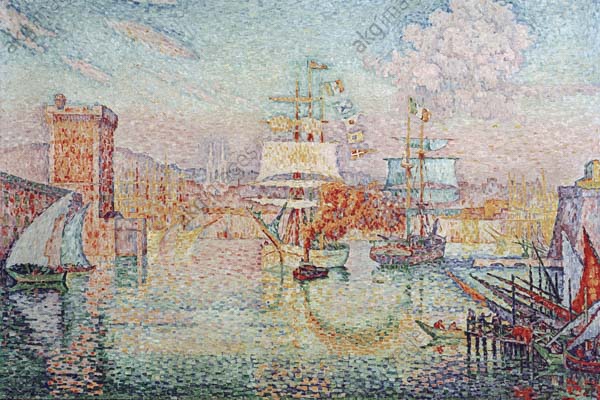 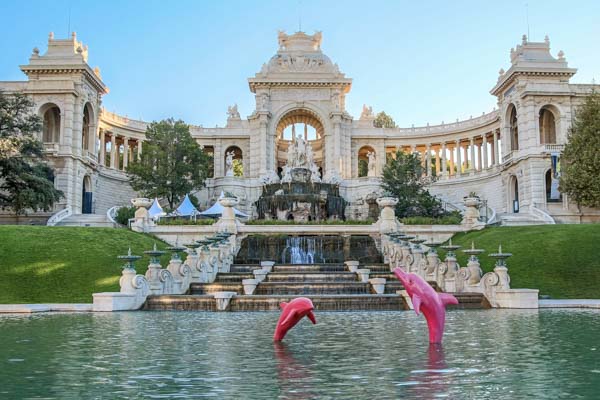 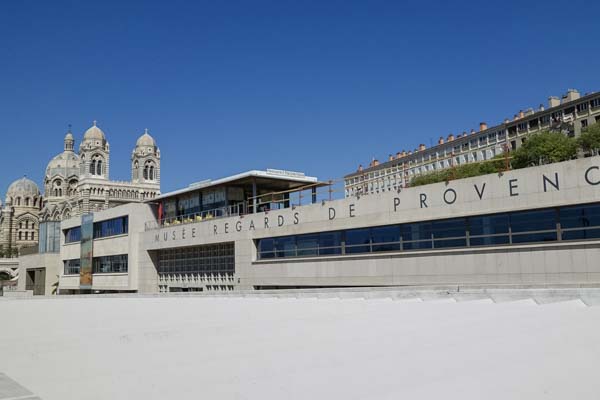 Opposite MUCEM, a wonderfully calm and serene gallery with sheltered views across the sea, the collection is mainly of local artists. You can also skip the art and enjoy the rather lovely cafe terrace with a view on the top floor. 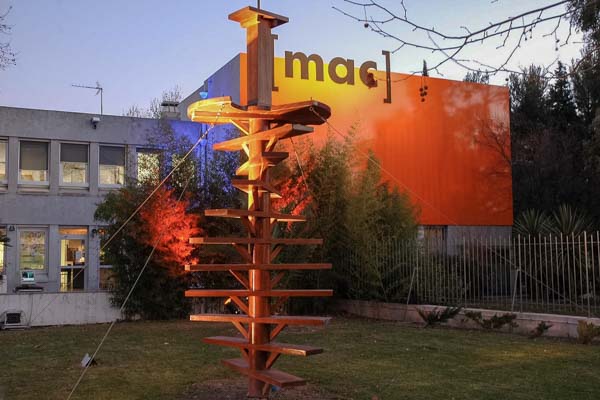 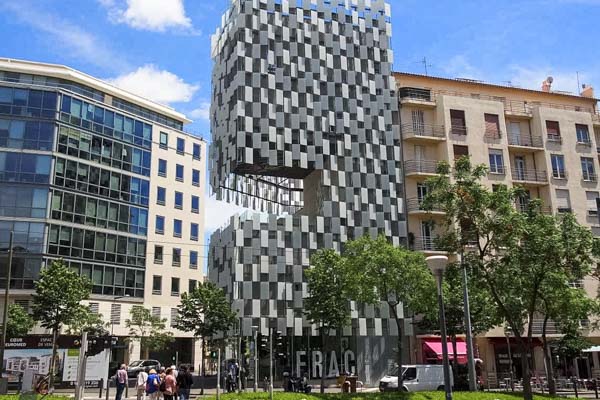 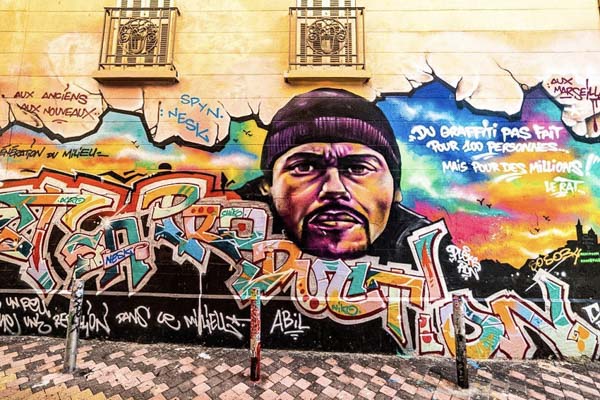 A bohemian quarter in central Marseille with the most amazing street art and graffiti. 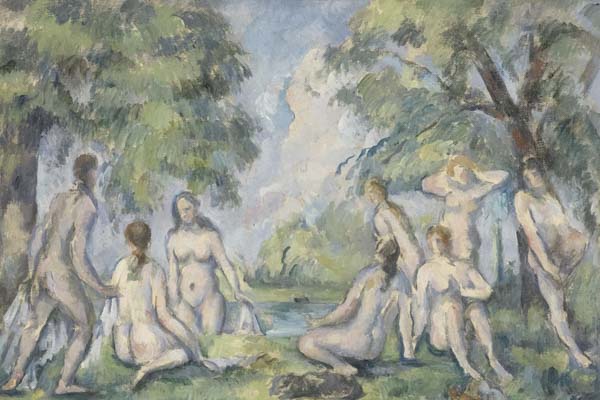 The Granet Museum has a dozen Cezannes, a Rembrandt, and classical French artists. 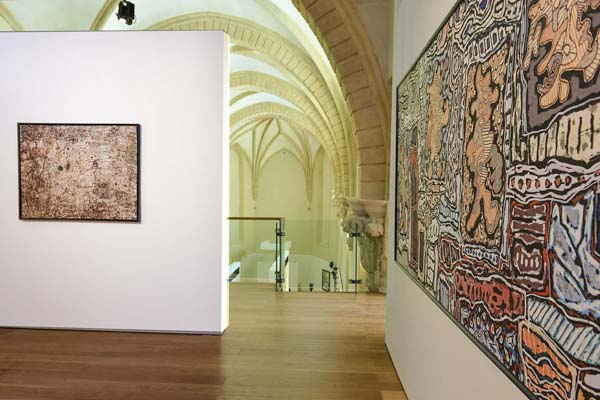 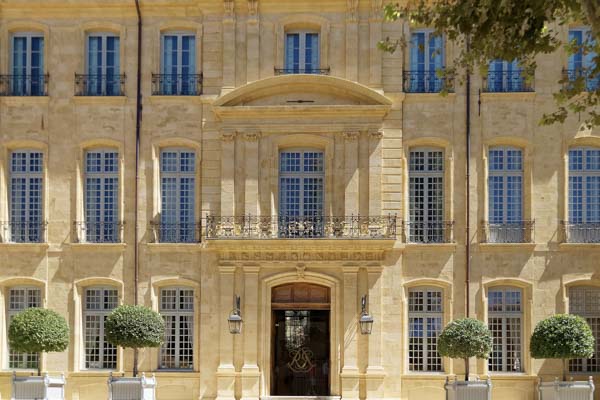 Two themed exhibitions a year in a stunning 18th century mansion, past shows have been on Canaletto, Turner, Sisley and Marilyn Monroe. 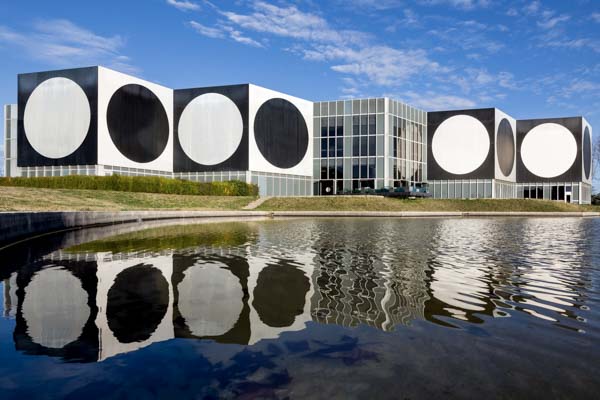 Massive op art works in a building built by and for the artist Victor Vasarely. 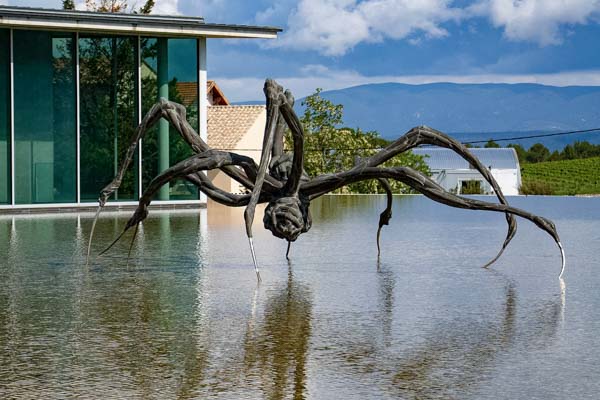 A hi-tech winery with an amazing collection of contemporary art amid the vines, with about 30 scultpures by famed artists including Alexander Calder, Andy Goldsworthy, Tracey Emin and Ai Wei Wei. 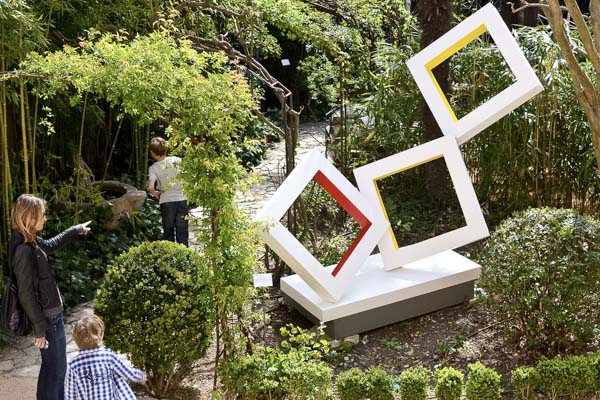 Contemporary sculpture exhibited in a lovely town house and out into the garden. 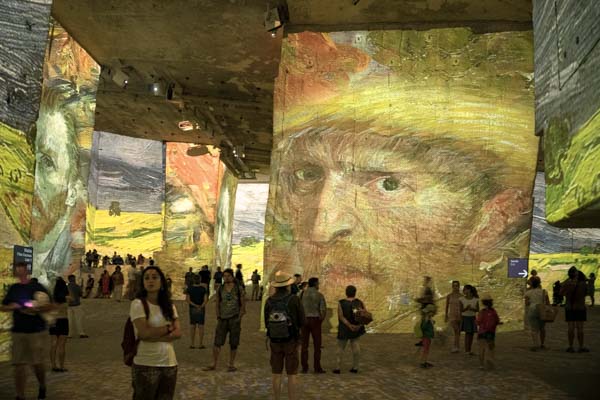 !n a disused limestone quarry, a stunning space for vast projections of art on the walls and floors, with accompanying music and sounds. Every year the theme is different, featuring one or more great artists. Recent shows have been on van Gogh, Monet, Klimt, Chagall and Michelangelo.